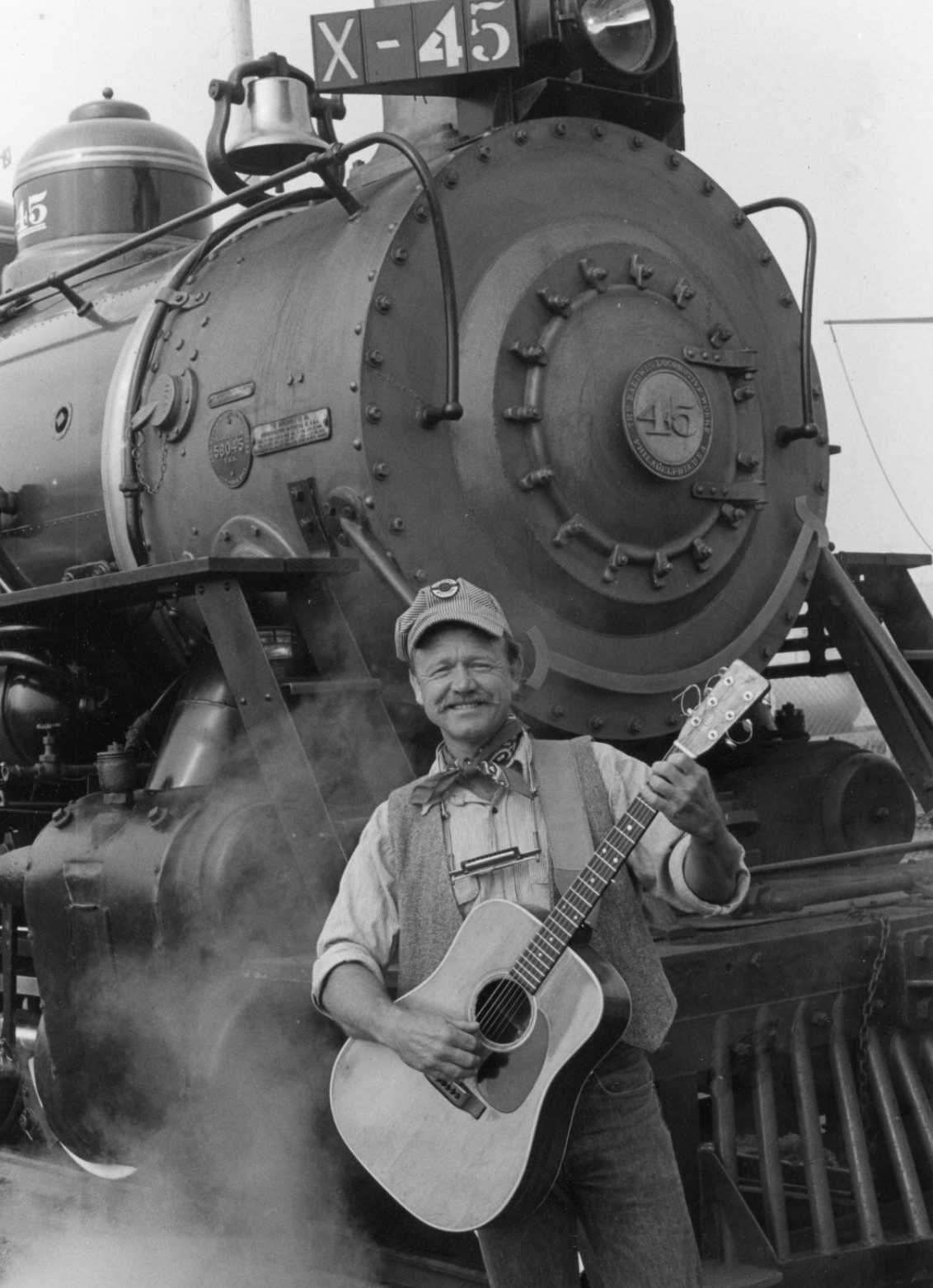 His famous mustache, sparkling smile, and kind face welcome you aboard.

With the look of an authentic vintage railroad conductor, Train Singer intrigues you with his signature “throat whistle”, sounding eerily like an old steam engine passing you by…

Greg’s commanding voice projects a diverse collection of train songs, interactive chants, and whimsical ballads of life on the railroad.

Along with his quick guitar- picking fingers, autoharp, and six harmonicas (including the World’s Tiniest Harmonica), he also has a vault of stories and jokes to tell.

Train Singer brings joy to folks of all ages, and has surely brought smiles to thousands of people around the world! Within this swirl of talent is the treasure of his music “off the tracks”. Greg created and became the persona of Train Singer, and has been riding the California Western Railroad Skunk Train, to the delight of passengers since 1988!

Although, he wasn’t always the Train Singer… Before he invented this character, “Mr. Schindel” was adored by hundreds of elementary school children as the Visual and Performing Arts Director for the Willits Unified School District. Schindel still performs at educational assemblies and museums in Northern California.

In the years before Train Singer, Greg received his early education at a boarding school in Exeter, New Hampshire. He later earned a Bachelor of Arts in Liberal Studies from Sonoma State University. In the 1960’s and 70’s, Schindel worked the music scene in Southern California, where he developed his original style of music, described as “Northern California Transcendental Folk Jazz”. Schindel was the lead singer and songwriter for the musical group, “Kindred Souls”. His songs include thoughtful lyrics about life in the country, love, and experiences along the way.

True to his heart, Greg fell in love and started a family, his greatest accomplishment of all. Over the years, the family has grown, and Greg’s musical talent has blossomed into the multi- faceted character he is today. 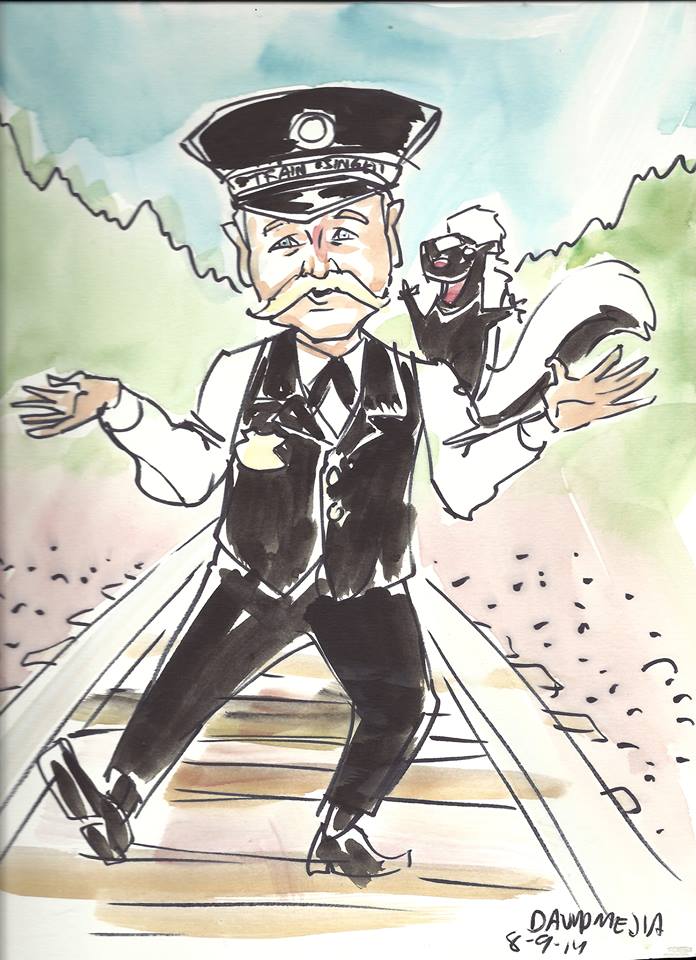 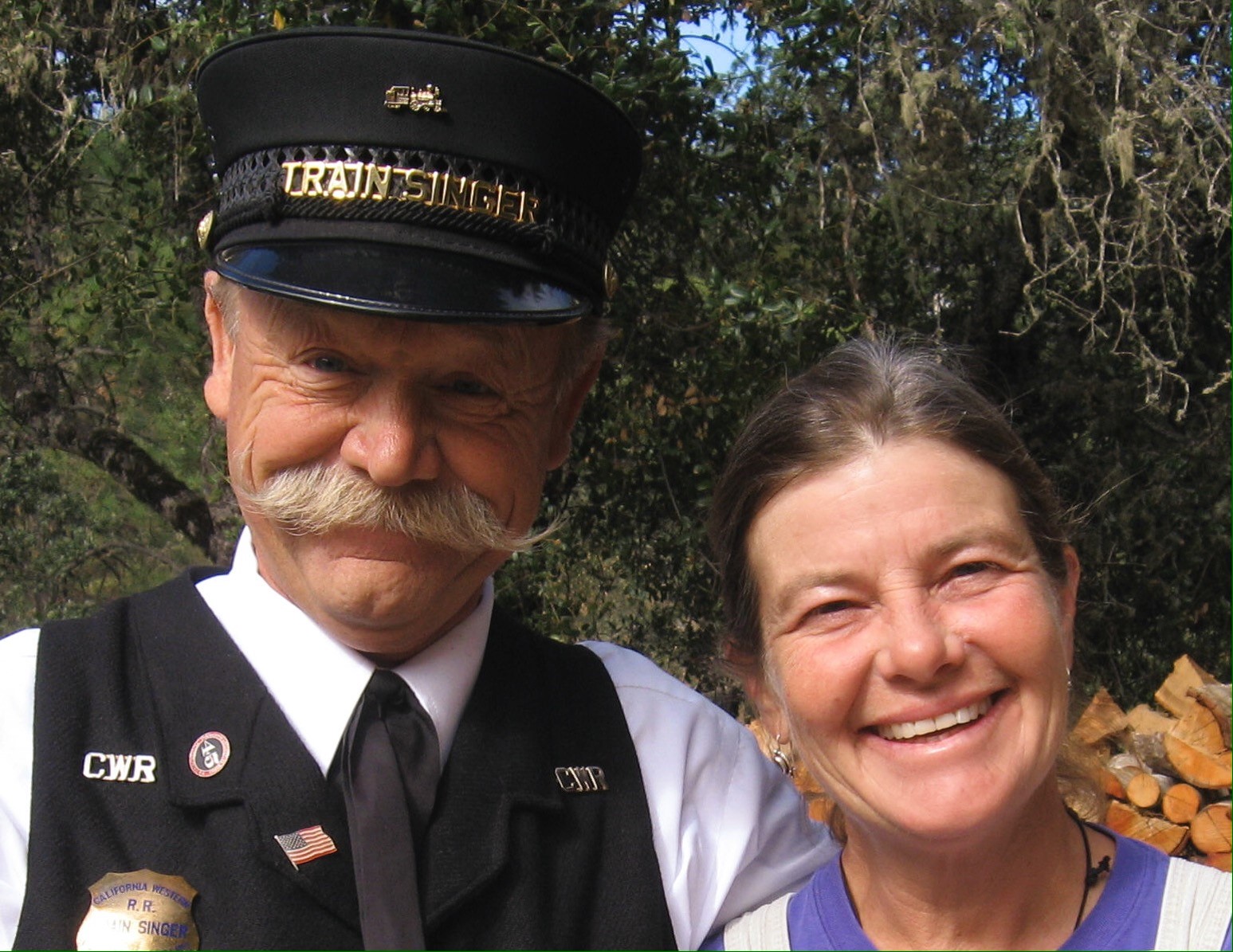 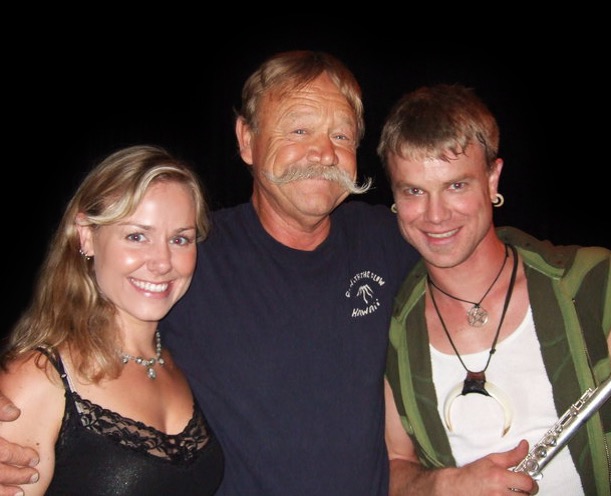 Greg’s son, Malakai, has followed in his father’s footsteps, exploring music from an early age, and harnessing a talent for playing nearly any instrument he set his hands on. Watching his dad play on the Skunk Train since he was a boy, Malakai took to the rails himself and trained to be a Singing Conductor, whose talents include playing the flute, guitar, harmonica, and even the didgeridoo! At times, Greg is also joined by his daughter, Heidi, singing old- time classics, such as “Sentimental Journey”, “Bye- Bye Blackbird”, “Chatanooga Choo- Choo”, and “On the Atchison, Topeka and the Santa Fe”, which are among the songs featured in Schindel’s recordings. His wife, Donna, has been singing with Greg for years. She also lends her talents as a photographer and designer for all of Greg’s albums.

Greg’s music makes you feel good, deep in your soul. He continues to write original music, overlaying his amazing voice with meaningful words and the haunting tones of harmonica over his own guitar- strumming. Of course, he created his own train songs, too, including “Whoopie! What a Ride”. They are the kind of fun tunes we have come to expect from the legendary, Greg Schindel, Train Singer.

It should also be noted, the congregation of St. Francis in the Redwoods Episcopal Church has been blessed with his leadership as the director of hymns and music, since 1988. Greg sends up his praises in song, and has been described as, “the heart of the congregation”.

His most recent endeavor is hosting his own radio show, “Bipolar Express” on KLLG 97.9 Willits, CA. Greg/Train Singer plays off his own personality, and is sure to have you in stitches of laughter, with commentary on relevant topics and music every week. The show has aired over 100 episodes! 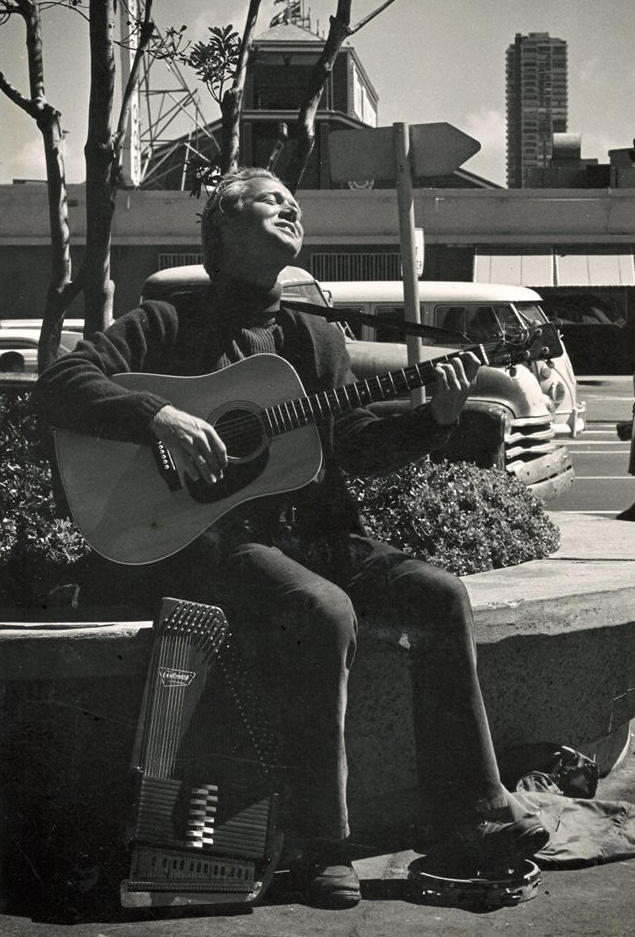 Fans from around the world share their photos of the legendary Greg Schindel AKA Train Singer. 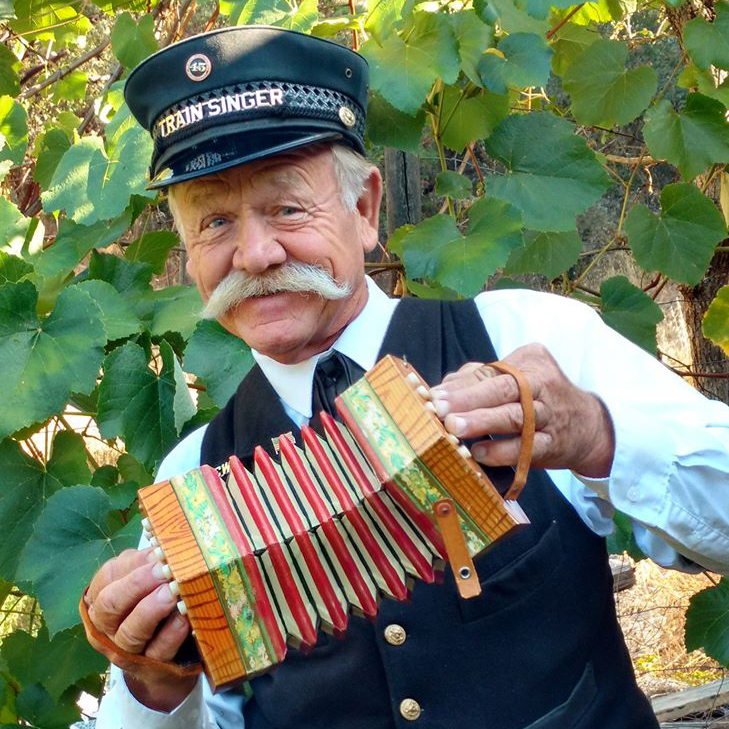 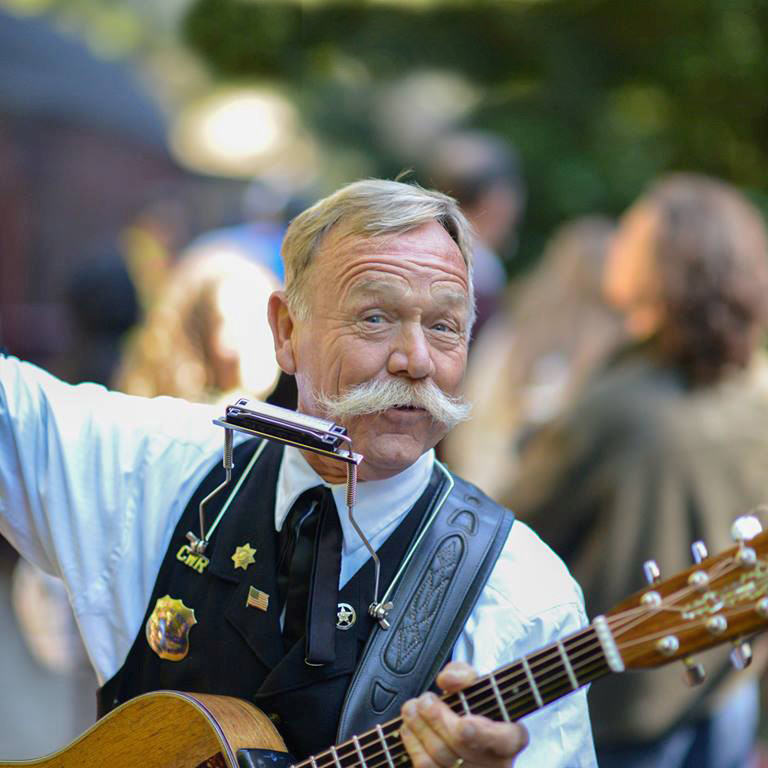 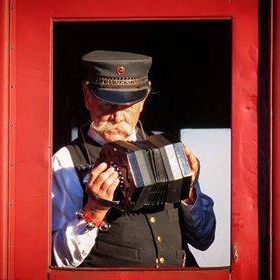 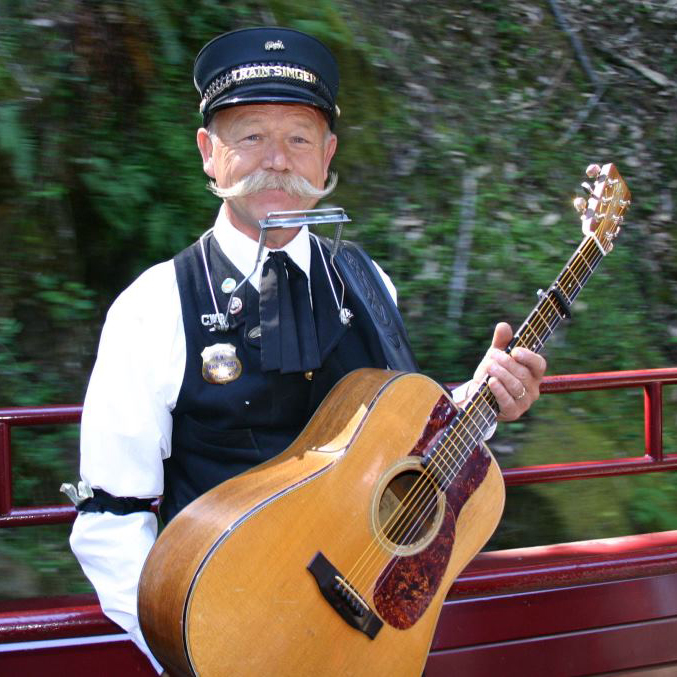 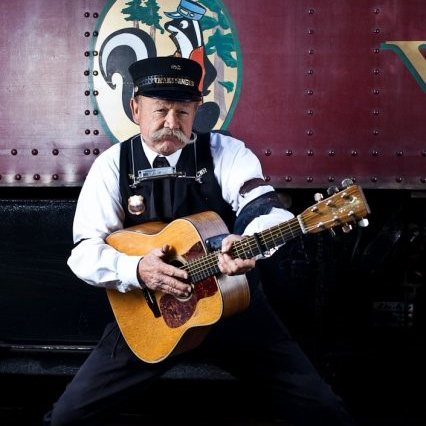